UltraHealth contact lenses for keratoconus are now available in a limited number of practices.  Ask you eye care professional about UltraHealth.

Methods: The charts of patients fit with SynergEyes lenses during the first 7 months the lens was available on the Cornea Service at Wills Eye Institute (August 3, 2006 to March 5, 2007) were retrospectively reviewed.

Conclusion: SynergEyes lenses are a promising alternative for visual rehabilitation in patients with KC and PMD who are intolerant or unable to be fit in RGP lenses.

Rigid gas permeable (RGP) contact lenses are the standard treatment for irregular astigmatism in keratoconus (KC) and pellucid marginal degeneration (PMD). However, many patients are intolerant to these lenses because of discomfort. Other patients, especially those with very steep and/or irregular corneas, experience frequent dislocation or decentration of the lenses.1,2 In such cases, the SynergEyes lens (SynergEyes, Inc, Carlsbad, CA), a third-generation hybrid lens with a RGP center and a soft skirt, is an option to overcome these difficulties and delay the need for penetrating keratoplasty (PKP).

The Saturn II (Barnes Hind, Inc, Irvine, CA) was the first-generation hybrid contact lens produced. A number of problems existed with this lens including discomfort and corneal neovascularization,3 which were felt to be because of hypoxia associated with the low diffusion solubility (Dk) materials and a tight fit. Modifications of the original Saturn II design resulted in the second-generation hybrid lens: the SoftPerm lens (SBH, Sunnyvale, CA). These lenses had the same design and materials but a larger diameter and modified edge design to allow better tear circulation. Despite having fewer complications than the first generation of hybrid lenses, the SoftPerm lens still achieved limited success because of a high rate of giant papillary conjunctivitis (GPC), chronic hypoxia, and breakage between the RGP and the soft portions.4 In an effort to overcome the many limitations of SoftPerm contact lenses, the SynergEyes hybrid lenses were developed. These lenses have a stronger RGP/hydrogel junction and a much higher oxygen permeability of the rigid center (Dk of 100 vs 14).5 In addition, the SynergEyes contact lenses are available with 2 skirt radii for each base curve and 3 skirt radii for special KC design lenses. A good range of RGP base curves (standard 7.10–8.0 in 0.10 steps and special KC design 5.7–7.10 in 0.2 steps) and a wide range of powers [220.0 to +20.0 diopters (D)] are available. In this study, we conducted a retrospective chart review to evaluate the initial results with SynergEyes lenses in the management of KC and PMD, in a corneal and contact lens referral practice with a special interest in the treatment of corneal ectasia.

The medical records of patients fit with the SynergEyes contact lenses on the Cornea Service at Wills Eye Institute during the first 7 months the lens was available (August 3, 2006 and March 5, 2007) were obtained through a computerized patient database search and were retrospectively reviewed. The patient data collected included sex, date of birth, ocular diagnosis, and the indication for SynergEyes fitting. The corneal topographies used for trial lens fitting, obtained using the Zeiss Atlas topographer (Carl Zeiss Meditec, Inc, Dublin, CA), were reviewed. The steep and flat keratometries (Ks), simulated Ks, and average Ks were recorded. The patients’ previous visual acuity and method of correction (whether RGP, soft contact, SoftPerm, or glasses) were noted, in addition to the most recent manifest refraction, if available.

The lens data included the base curve, skirt, and power of the initial lens dispensed; the number of refits and reorders during the follow-up period; and the final base curve, skirt, and power of the lens at the last follow-up. When the base curve and/or skirt was changed, the direction of change was noted (flatter or steeper). The initial base curve and skirt of trial lens were selected on the basis of the corneal topography, starting on the flat K for the base curve of the RGP portion, and using a steep skirt if there was inferior steepening. Because of previous experience with hybrid lenses in patients with KC, the goal was to fit a relatively flat lens without significant inferior edge lift, to avoid tight fitting lenses.

The charts of 44 patients (61 eyes) were reviewed, and included 26 males and 18 females, with an age range of 19–62 years (mean age 40.1 6 12 years). Twenty-seven patients had 1 eye fit and 17 had bilateral fitting. The bilateral cases were often those who wore SoftPerm lenses previously. The ocular diagnosis was KC in 58 eyes; only 3 eyes had PMD. The average follow-up for these patients was 7.86 4.6 months (range from 1 to 17 months). 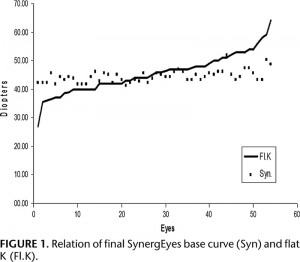 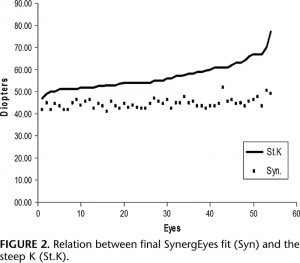 Complications occurred in almost one third of the eyes (19 of 61 eyes, 31.1%). The most common were GPC and allergies in 7 eyes (11.5%). These patients were treated with topical mast cell stabilizers and/or antihistamines. DES was diagnosed in 5 eyes (3 patients). A corneal abrasion occurred in 1 eye over a scar, but the patient was able to resume the contact after healing and use of ointment at bedtime. One corneal ulcer less than 1 mm in diameter with surrounding edema and neovascularization occurred in a patient with atopy. This responded to intensive topical antibiotic treatment. The patient resumed lens use but decreased the wear time from 15 to 16 hours per day to 10 hours. Two contact lenses developed tears in the hydrogel portion and not the RGP/hydrogel junction (Table 1). Four of the eyes with complications were refit with looser base curves, including 2 with DES and 2 with worsening allergies. One eye with GPC was refit with a looser skirt.

The most common complaint was discomfort, occurring in 16 eyes (26.2%), resulting in the stoppage of the contact in 5 eyes and accounting for (5 of 8 eyes) 62.5% of the failures. Interestingly, 1 patient decided to resume SoftPerm lenses because it came in a looser base curve (8.1) and then returned to be refit with the SynergEyes when the company provided lenses with the looser parameters (Table 2).

Failures occurred in only 8 of 61 eyes (13.1%) of 7 patients; lens discontinuation was early in 5 patients (1–2 months). The reason for failure was discomfort in 5 eyes. Two patients underwent PKP and 1 is considering PKP; 1 eye went back to RGP’s and 1 resumed SoftPerm lenses temporarily. Unsatisfactory vision was the cause of failure in 3 eyes, 2 of whom returned to RGP. One remained without correction because it was the same as with the contact lens (20/40) because of a traumatic cataract in this eye and had a PKP in the other eye (Table 3). 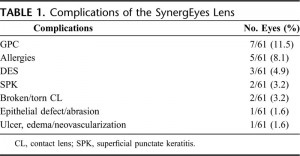 Table 1. Complications of the SynergEyes Lens

Our initial experience with the SynergEyes lenses has been very positive with a success rate of 86.9%. These lenses have an important role in visual correction in many patients with KC or PMD who have failed RGP lenses because of poor fit or discomfort and would otherwise require surgery. In addition, patients are very enthusiastic about these lenses and often comment that they have changed their lives for the better. Patients often request to have their other eye fit with a SynergEyes. Because of the problems of dry eyes and allergies that have occurred in some patients and were also reported in the previous generations of hybrid lenses, we prefer to wait 3–6 months before fitting the second eye, unless the patient is already using SoftPerm bilaterally. We advise patients to lubricate their eyes regularly when wearing the contacts, to treat any allergies chronically, and limit their lens wearing time to 12–14 hours per day.

Table 2. Complaints and Their Outcome

Second-generation hybrid lenses, SoftPerm, offered a reasonable alternative to RGP lenses when they became intolerable or difficult to fit, but they still achieved limited success. Chung et al6 reported breakage of the lens at the RGP/hydrogel junction as the most common complication (48.5% of cases). In this study, only 2 patients (3.2%) reported torn contacts. This is because of the differences in lens design, with an improved RGP/hydrogel junction (Table 4).5

The major shortcoming of the SoftPerm lenses was the chronic hypoxia resulting from the low oxygen permeability of both the rigid center and the soft skirt, which gave rise to high incidence of neovascularization and pannus formation (27.3% in Chung’s study).6 The SynergEyes design with the high oxygen permeability has resulted in a very low rate of the chronic hypoxia and subsequent neovascularization and pannus formation, at least during the relatively short-term follow-up. Only 1 eye of 61 in our study (1.6%) developed neovascularization and that was in a patient who overwore the lens 18 hours per day and developed a small presumed bacterial corneal ulcer. 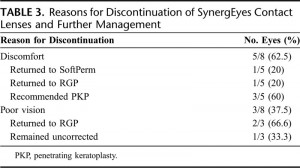 Discomfort, probably because of hypoxia was also reported by Chung et al6 to be a major issue with SoftPerm lenses occurring in 40% of the cases, accounting for 82% of the failures. Discomfort was less common in our patients in this series (16 of 61 eyes, 26.2%) and most patients (11 of 16, 68.7%) resumed lenses wear successfully.

Another complication of SoftPerm contact lenses was the high incidence of GPC, which occurred in 27.3% of the cases in Chung’s study.6 In our study with the SynergEyes, it only occurred in 11% of the cases (7 of 61 eyes). This is close to the rate in conventional soft contacts (10%), yet higher than that for RGP lenses, which is less than 5%.7 Patients with KC often have allergies.8 Lenses with a hydrogel component that are only replaced every 6 months are likely to aggravate allergies. This can be managed with regular enzymatic cleaning using a hydrogen peroxide system and with the chronic use of topical mast cell stabilizers/antihistamine drops (before and after lens use.)

The SynergEyes lenses are a major advance in the management of KC. Anecdotally, they improve the quality of lives in patients who have previously failed RGP lenses. Further studies on contact lens–related quality of life issues in KC are currently underway. We consider RGP lenses the gold standard for patients with KC because they provide excellent vision and have the best safety record. However, SynergEyes lenses enable many RGP failures to avoid surgery, including patients with mild to moderate disease who have discomfort with RGP lenses and those with advanced disease, without central scarring, who cannot be successfully fit with RGP. We recommend that patients with KC who are RGP failures be refit with SynergEyes before recommending surgery.

Click here to learn how to handle and care for your UltraHealth and ClearKone lenses.

This website uses cookies to improve your experience while you navigate through the website. Out of these, the cookies that are categorized as necessary are stored on your browser as they are essential for the working of basic functionalities of the website. We also use third-party cookies that help us analyze and understand how you use this website. These cookies will be stored in your browser only with your consent. You also have the option to opt-out of these cookies. But opting out of some of these cookies may affect your browsing experience.
Necessary Always Enabled

Any cookies that may not be particularly necessary for the website to function and is used specifically to collect user personal data via analytics, ads, other embedded contents are termed as non-necessary cookies. It is mandatory to procure user consent prior to running these cookies on your website.

SAVE & ACCEPT
Scroll Up